Count Natale Labia was born in 1877 in the little town of Cerignola, near Foggia in Italy. He joined the Italian Foreign Service 1906 and in 1916 he was transferred as Italian Consul to Johannesburg where he met Ida, daughter of the mining pioneer Sir J.B. Robinson whom he married in 1921. Early into their marriage, the Count was appointed Italy’s first minister plenipotentiary and following “JB’s” death in 1929, Count & Countess Labia decided to build a home of their own at Muizenberg on ground which, in the distant past, had been the site of an old battery set up to protect False Bay from hostile and marauding ships.From the start the house was intended to be not merely a family home, but also the Italian Legation, the official residence of Italy’s diplomatic representative in South Africa. As such it had to be essentially Italian in style and character. In particular it was to reflect the spirit of 18th century Venice, it was to be a Cape version of the Palazzo Labia. The man chosen to draw up the plans for the house was the well-known Cape Town architect, the late Fred Glennie.

The interior fittings – the furniture, chandeliers, mirrors, ceiling panels and wall fabrics – were imported from Venice. To ensure that the work was carried out in authentic Venetian style, the Count arranged for an interior decorator to be brought from Italy. The decorator, an excitable and voluble Venetian by the name of Angelo Zaniol, arrived in Cape Town early in 1930 and remained there for the rest of his life. As well as being an experienced decorator, Angelo was a competent artist, one of his few surviving works being the still life that hangs in the dining room at Casa Labia.The building of the house began in 1929 and was eventually completed in 1930. One of the first receptions was in the honour of the King of Italy’s birthday on November 12 of that year. As Count Natale Labia’s diplomatic projects progressed, and as his circle of friends expanded, he began to play an increasingly significant role both in political and economic spheres. Casa Labia came to be a meeting place for statesmen, academics and businessmen from all over the country such as Nicolaas Christiaan Havenga, South Africa’s Minister of Finance from 1924 to 1939, and Isidore William Schlesinger, the well-known entrepreneur and businessman.

With Mussolini’s invasion of the independent African state of Abyssinia and the South African threat of sanctions against Italy, the strain on Count Natale Labia was to prove too great and he died of a stress-related heart-attack in January 1936. In recognition of his long association with South Africa, the Government generously provided a state funeral. It was an impressive affair, with a military band and a long procession of cars and curious onlookers. Writing of the Count the Cape Times commented: “He liked our country and he liked its people and it may equally be said that they liked him, for he was a man natural goodness of heart and of charming hospitality.” And The Cape Argus commented, “Count Labia’s public spirit and generosity are known to every Italian in the Union and to many who are not Italian. He fathered the community in South Africa and helped their children to go to see Italy. He inspired many a good work which no doubt will be continued even though he himself has gone”.

After the funeral Ida Labia took her two sons to live at Hawthornden, Wynberg and refused for a time to set foot in Casa Labia. But in later years she would take her family there for the summer holidays. After Ida’s death in 1961 the house stood empty once more – and a little later, The Fort was leased to the Canadian Government as their embassy in Cape Town and it was subsequently leased for many years to the Argentine Government.A new phase began in 1985 with the joint decision on the part of the Department of National Education, the Director of the South African National Gallery, Dr Raymond van Niekerk, and the Treasury, to preserve Casa Labia and to open it to the public as a museum and cultural centre. The brief converting Casa Labia into a satellite museum of the South African National Gallery was given in July 1985. Construction commenced in May 1987 and the work was completed in March 1988.Twenty years later, in 2008, Count Luccio Labia (son of Count Natale Labia) regained ownership of the property, and it was with assistance from his daughter, Antonia Labia Hardres-Williams that the house was lovingly restored to its original glory and opened as a multi-functional cultural centre and up-market venue in May 2010.

Casa Labia, a declared national monument, is located on the Main Road, Muizenberg and is part of the “Historical Mile” which includes the Recreational Grounds which are on the site of the old barracks erected c. 1740; Muizenberg Station; die Post Huys c. 1673; the old Post Office, later a court house; the old Carnegie Library erected in 1910 and later used as a police station; Casa Labia erected in 1929 as the home of Count and Countesss Natale Labia; the two stone villas adjacent to The Fort, and Yokohama, know for many years as the “paper mache” house, which was imported from Japan. On the mountain side opposite Bailey’s Cottage are the trenches used in the Battle of Muizenberg, (on the site of the Eastern Battery erected during the First British Occupation and designed by Thibbault); Rust-en-Vrede designed by Sir Herbert Baker for Sir Abe Bailey; Rhodes Cottage and Garlick’s House. The Whole of the area Described was the focus of the Battle of Muizenberg in 1795. The only guns fired from Dutch East India Company fortifications were fired from the site of Casa Labia and an area below it near Die Post Huys.

Casa Labia is available for hire to host special occasions, as well as exclusive film and photographic shoots. With a unique splendour that appeals to both the corporate and private sectors, Casa Labia effortlessly lends itself to the creation of special experiences and unforgettable memories. 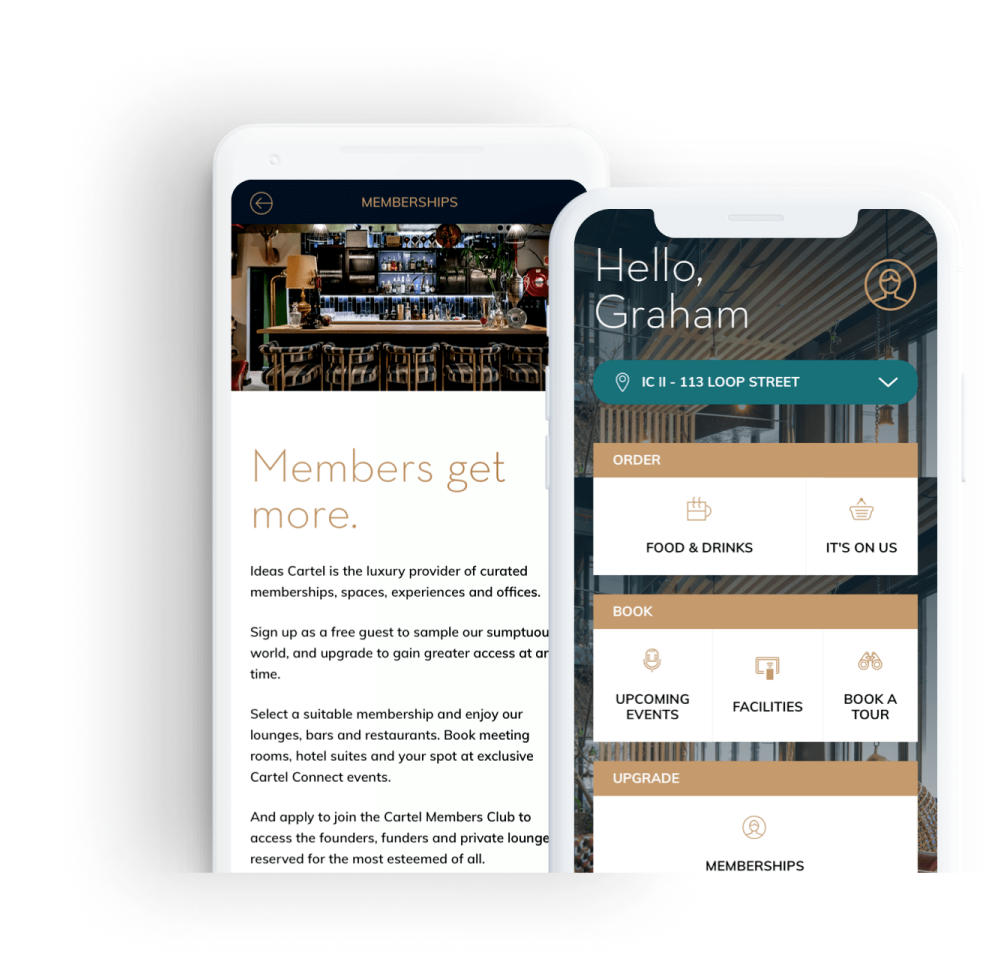 Let's make this easier for you!

Download your digital concierge—the Ideas Cartel app.
Whether you want to book a meeting room, order a coffee or request a private limo pickup (ohhhh yes), it’s all #ontheapp.
One platform to experience all forms of superior service.